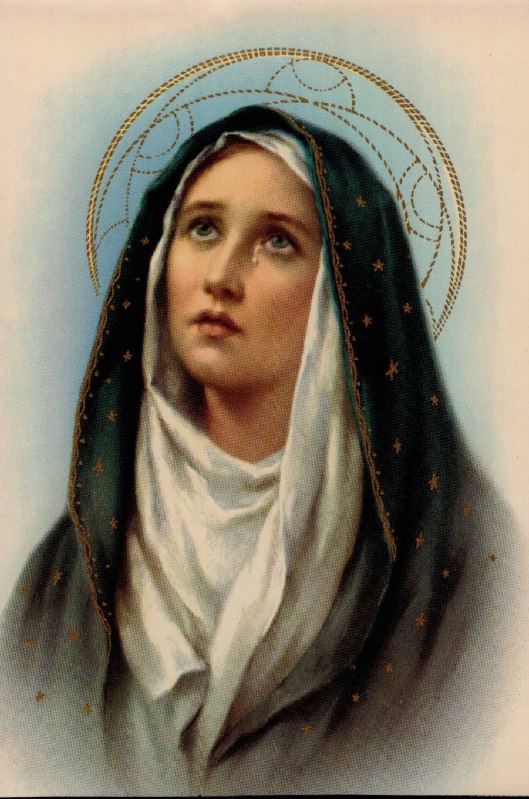 The Family and the Cross – Jospeh Breig

It is utterly impossible for any human being to come within a mile of appreciating fully the sacrifice made by Mary when she gave her divine Son for our salvation.

God alone can understand it. We cannot, because in order to do so we would have to be as pure as Mary, as totally sinless as she, and equally capable of love. We are not.

But there is one thing that we can understand and appreciate, and that is that neither Mary nor Christ sniveled when they met while He was on His way to crucifixion.

Jesus was wounded infinitely more, and Mary immeasurably more, than any one of us possibly can be, but they did not indulge in self-pity or in recriminations against God for appointing them to carry so dreadful a burden. Christ is God, and as God He perceived clearly and completely why He was going to His death, and what incalculable good He was accomplishing.

Christ is man, and as man He was intolerably laden with our sins.

But Mary is human only; and as a woman we salute her and boast of her.

In the hours of Christ’s Passion, she did indeed give mankind something of which to be proud forevermore. She is one of us, who are less than the angels; but she earned a place unthinkably higher in eternity than the place of the highest and holiest angel.

The poet who called Mary ‘our tainted nature’s solitary boast was inexpressibly more right than he could possibly have realized. Not any of us can ever grasp with our minds the fullness of Mary’s nobility and dignity.

No honor that we can pay to her, save only the divine honor which belongs to God alone, is too much honor. Because of her, a representative of our human race is enthroned in the highest place possible for any creature. One of our own is Queen of Heaven, Mother of God, co-Redeemer with Christ, and co-Ruler of the everlasting kingdom.

Unless we understand something about Mary, we cannot understand much about the Passion of Christ. Christ’s physical sufferings, dreadful though they were, were small and superficial compared with his psychological and spiritual agony.

If we cringe at the thought of the tortures inflicted upon Him, if our hearts ache at the sight of the beatings and piercings, then we ought to feel utterly broken in the presence of his invisible torments.

They were invisible, but they become visible to the eye of one who meditates upon Mary. For Mary’s passion was entirely psychological and spiritual; it was completely invisible, yet so terrible that had Christ’s sufferings been merely of the body and not of the soul at all, then Mary’s agony would have been an agony more frightful than His.

Death has its bodily terrors, but the most terrible terror of death is the rending apart of a creature in his deepest depths; it is the separation of body and soul, compared with which nuclear fission is a mild and slight division.

Now the agony of Mary was an agony incomparably more dreadful than the rending of a man’s being by death. What death tears apart is an arrangement of nature; and that is a frightful tearing. But it is as nothing compared with the forcible separation of total love from total love.

And that was what happened when Our Lady was separated from her Son. Mary’s whole matchless being, capable of unthinkably greater love than any other creature, was utterly in love with her Son.

To be separated from her Son, to see her Son reviled and wounded, was for her worse than an eternal succession of physical deaths. Indeed, it is impossible to understand how Mary’s physical heart endured the sight of the tormented Christ without physically breaking and bringing on bodily death.

I personally would speculate that her heart was miraculously preserved from breaking.

However that may be, what Mary endured was of the type of what Christ endured in the Garden of Gethsemane, when His human nature was so inexpressibly tormented by His horror of sin that He sweat blood.

It does not seem to me that Our Lady’s body, unless divinely sustained, could have survived the spiritual and psychological torture she endured in seeing her Son led to execution in unthinkable suffering. I think that God’s intervention must have been necessary to keep her from dying on the spot when she met Jesus on His way to Calvary.

We approach now the depths of this matter. For not only did Mary endure a million deaths upon millions of deaths, but she never for a moment doubted God and God’s goodness. Not for an instant did she rebel. Not even remotely did she allow her faith to be shaken. Her will never turned the tiniest fraction of an inch from her utter consecration to God and to God’s inscrutable purposes.

In the midst of a spiritual agony which ought to have shaken the universe into chaos, she freely gave her Son for our redemption. She gave Him back to the impenetrable purposes of God from Whom He had come to her. She made, willingly, indomitably, and with a courage that makes the mind reel, the incomparably, most supreme sacrifice of which it is possible for any created being to be capable.

Mary gave absolutely everything, she sacrificed all, she held nothing for herself, because her all, her everything, was Christ.

And as I said, she did not snivel. She indulged in no theatrics. Not once did she cry out that this was too much, that she could not stand it, that to ask this of her was asking more than flesh and blood could endure.

There on the way to Calvary, two beings of unthinkable nobility looked into each other’s eyes and faced squarely, without the slightest retreat or deviation, the most awful duty of which it is possible to conceive.

Christ and Mary had a work to do. They had a world to save. They had a spiritual family to bring forth in unutterable anguish. Upon them fell the grinding, crushing labor of giving birth to the children of God who are to share with God His own divine life and happiness forever and forever.

That was their task, the task of Jesus and Mary; and although it meant for each of them such suffering and rending as is utterly outside the grasp of the human mind, they proceeded to it bravely, without the slightest outcry of protest.

They simply took up the burdens without question because they loved not themselves and their comforts, but God and their fellowmen.

And this is what we must try to learn from them – the hidden merciful designs of God, which come out of His infinite love and wisdom, not for our destruction, but for our perfection and glorification. 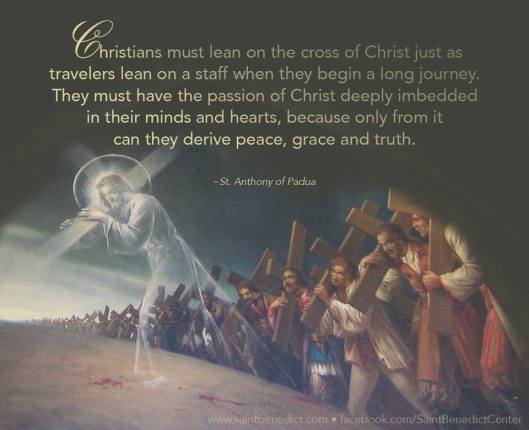 For the guys: “The bright husband will never relinquish the prerogative of being a gentleman. Thoughtfulness is his watch word. A kindness here and a consideration there go a long way to promote companionship with his wife. The opening of a car door for her, helping her with her coat, seating her at table, these and a dozen other little actions evidence his tenderness for her. She is precious to him, so he surrounds her with attentions.” 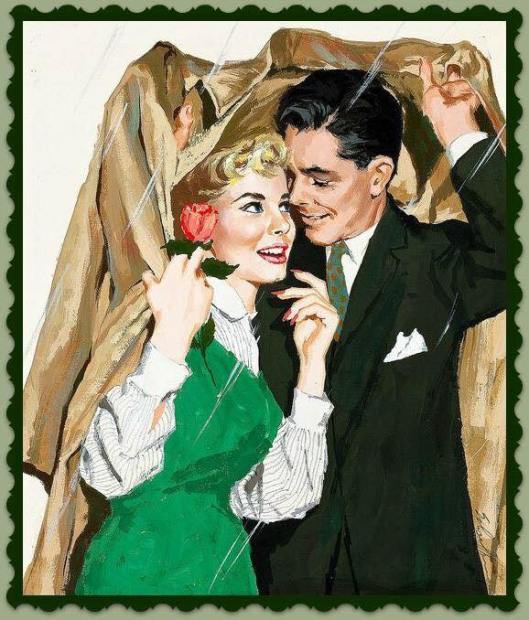 You will find this book fascinating! Rev. Ronald Knox puts down his intimate thoughts about the Mass….and he puts it in simple, readable language, as his audience was a group of school girls! It will give much meditation on the Holy Sacrifice of the Mass….from the Introit to the Last Gospel!

From more info read the reviews on Amazon here.

The Mass in Slow Motion 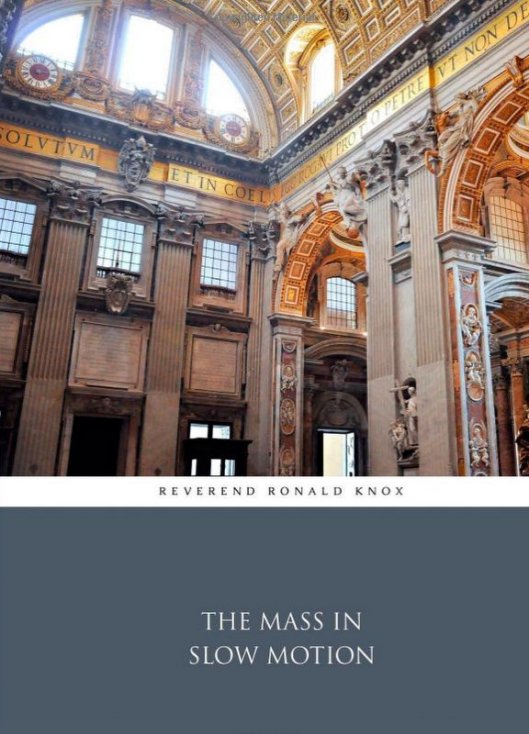 Rose Garden “Queen of the Home” Apron! Feminine and Beautiful! 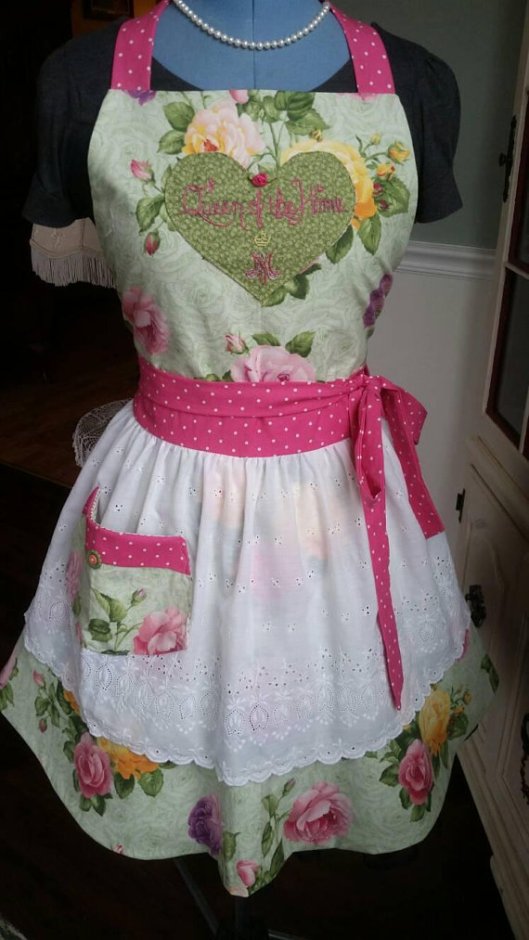 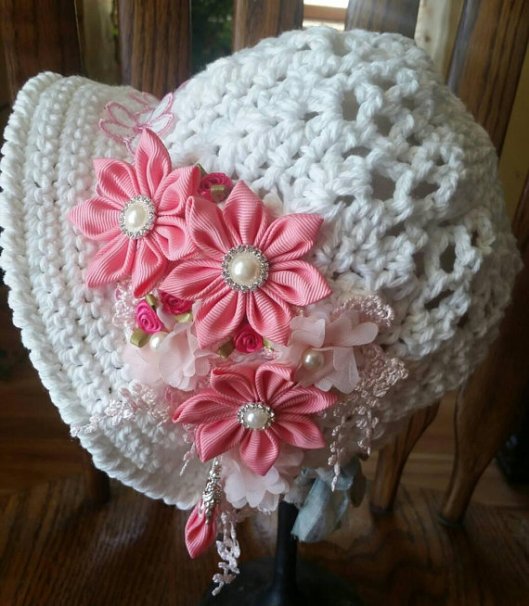