by Maria von Trapp, Around the Year With the Trapp Family

In answering the same question over and over again I developed something almost like a slogan, which I finally stated on the stage at every concert when giving a little introduction to our ancient instruments “If a family plays together, sings together, and prays together–it usually stays together.”

Then harassed parents wrote back asking what they should do to keep their young ones at home. They would much rather go to the movies or to a ball game. I tried to answer this at length, but to do it in writing was not very satisfactory.

Therefore, when we decided to open a summer camp–The Trapp Family Music Camp–I was delighted to be given the opportunity to show people by doing what we meant. The evenings of each camp session were always devoted to “home entertainment.” And once the camp closes at the end of August, our home remains open for guests, and there we carry right on, living as we had been used to in Austria.

In Advent we have our Advent wreath and we follow all the old customs for Advent and Christmas. We celebrate a fun Carnival and a strict Lent.

We paint our Easter eggs in different ways and have as beautiful a Corpus Christi procession as we can arrange.

Every Saturday night we have our preparation for Mass–and anyone who happens to be in the house is invited to participate.

It happens quite frequently that we talk with other parents about home life. The chief regret is that entertainment has become so predominantly passive in our days. People just sit back and let themselves be entertained by watching a ball game, or television, or a movie, or listening to the radio. Almost invariably the question will be asked, “But what else could you do?”

We can only tell them what we, the Trapp family, do. Or, even better, invite them to share our evenings with us….

Coming from Austria to America meant coming from a country known from time immemorial as “the land of dancers and fiddlers,” a country that had brought forth not only hundreds of most picturesque folk dances, but also that world-wide favorite, the Viennese waltz–to the country that had given to the world jazz music and the dancing that goes with it.

Needless to say, we soon found ourselves engulfed in endless discussions on the subject of folk dancing versus modern ballroom dancing.

Many times we were told: “But is not jazz America’s popular music and true `folk dance’?”

Here is my answer: Most of the so-called popular music of America certainly does not come from the people. Rather, far removed from any creative contact with this earth of ours, it is composed in some New York skyscraper; it is propagated by modern means of mass propaganda, radio and television, to a nation of one hundred and sixty millions; and upon the appearance of its successor, completely forgotten and lost.

And now let us take a look at the people who dance in the bars and nightclubs and dance halls. In the first part of the evening there prevails an air of sophistication which shows in facial expressions of bored indifference. As the evening progresses, however, the low rumbling of the rhythm seems to increase and to win out over the poverty of the melodies. And then something like a trance takes hold of the dancers as they trip around and slur and wiggle, hypnotized by the suggestive sound of the jazz orchestra.

As one looks down from a gallery on one of the modern dance halls, one is struck by something else–a picture of utter chaos. There is no pattern of movement relating the dancing couples; each pair seems alone on its narrow piece of floor, busy only with itself, with no thought for the others. The red or purple twilight mercifully conceals what could easily be read on the dancers’ faces; for we must not forget that the dance is a universal language, just like music; as it involves the whole body, it has a depth and wealth of expression which surpasses by far the language of words.

It is high time for all Christian parents to wake up and see what has become of modern ballroom dancing. I say on purpose ballroom dancing. At the time when I was quite young, or when our mothers “came out,” there existed ballroom dancing too, as distinct from folk dancing. But at that time the waltz, the minuet, the Rhinelander and polka, the quadrille, gallop, and mazurka held the place taken today by jazz and jitterbug.

Each nation added one or two favorite national dances, Austria the “Laendler,” Sweden the “Hombo,” Jugoslavia the “Kolo,” Hungaria the “Czardas.” How could one single generation have been so careless as to lose all these precious goods which had enriched the lives of many generations?

The last years, however, seem to have brought about a reaction. In French Canada there is the beginning of a movement aimed to reintroduce folk dancing to young people. In America the English and Irish square dances are becoming increasingly popular, and all over the country little groups seriously interested in the folk dances of many nations are forming. We were surprised to find on the West Coast even more interest in folk dancing than in the East.

We have always enjoyed our inheritance of Austrian folk dances. As we started touring all over Europe we exchanged our own national dances for those of the country whose guests we were. So it comes that we have a large collection of European folk dances which we brought home from our travels. From the very beginning of our summer Music Camp, folk dancing has been an integral part of our evening entertainment. It was always a joy and a rewarding happiness to see how everybody took to it enthusiastically.

One difficulty is usually the music. One should realize from the very beginning that record players are not the right accompaniment for folk dancing. They are too mechanical, too rigid. People simply have to learn to play instruments again accordion and guitar, fiddle and clarinet, or the recorder, the ancient flute that is gaining so many new friends today.

One thing is sure people have always danced, and always will. By experience we have learned that it is not enough to criticize an existing system; one should rather supplant it with a better one, overcome the evil with the good. Parents might get interested in the nearest folk dancing group, join in their evenings, learn the dances, read about them, learn to play the dances on simple instruments and then introduce them in their own homes. With these folk dances, old and new, and the ballroom dances of our own youth, we shall be able to enjoy many a happy evening together with our families.

One more thing needs to be said here there are times when dancing is allowed and times when dancing is forbidden “All things have their season….There is a time to weep and a time to laugh, a time to mourn, and a time to dance” (Ecclesiastes 2:1-4). This also has become forgotten, and dances in parish halls on Saturday evenings during Advent and Lent are not infrequent. Again, we have to wake up from our sleep, or shall we call it stupor, and look to our Christian inheritance in order to learn when we should dance and when not.

Then, in spite of “but everybody does it,” we shall act accordingly. It may not always be easy to be a true Christian, but it brings inner happiness–that kind of happiness which is the result of a sacrifice cheerfully brought–the happiness the children of the world ignore.

One of our favorite evening pastimes has always been reading aloud. In the old country, when I could do it in German, I would read what amounted eventually to a small library, while the family would be knitting, darning, or whittling. Among the books were historical novels, which led quite naturally into talking and discussing the period of that time; short stories; and one or the other of the great novels of world literature. Stevenson’s “Treasure Island,” Kipling’s “Kim” and, of course, his “Mowgli” Stories delighted the younger listeners.

Such readings would go on over several weeks; we would hurry from supper into the library and settle around the fireplace for a few hours’ intense enjoyment of one of the world’s literary masterpieces. (In this way a great many Christmas gifts got finished, too.)

Then we discovered the great pleasure of reading plays together, each one reading a part aloud. Some of Shakespeare’s tragedies and comedies should be read this way in every home.

If the children are led by stages from the fairy-tale age to “Winnie the Pooh,” “Little Women,” “Oliver Twist”–to mention but a few of the childhood classics–they will come to demand another such session every winter. In later years they will refer to those times as “the winter we were reading `Great Expectations'” or “that winter when we were plowing through `War and Peace’.”

Quite apart from acquainting us with the best works of the world’s great writers, it cannot be stressed enough that reading as a group is altogether different from reading for oneself. Family reading provides another valuable thing in great danger of dropping out of our lives–the ability to form an opinion and state it–which is the very essence of group discussion.

As the children grow up, the books will change in character. There will be biographies of saints, books on the spiritual life, and books of philosophical character. The discussions that grow quite naturally from our readings may later be long to our children’s most cherished memories.

“You should fear nothing, if you are equipped with the strongest spiritual weapon —Holy Communion. It prevents mortal sin—the greatest evil in the world—from taking root in your soul and even washes away the stains of venial sin so long as you have no affection for it nor desire to commit it in the future. The coming of Jesus in Holy Communion awakens new love in your heart and encourages you to live in purity and sinlessness, which is a necessary condition for happiness.” -Clean Love in Courtship, Fr. Lovasik http://amzn.to/2fOwQm9 (afflink) 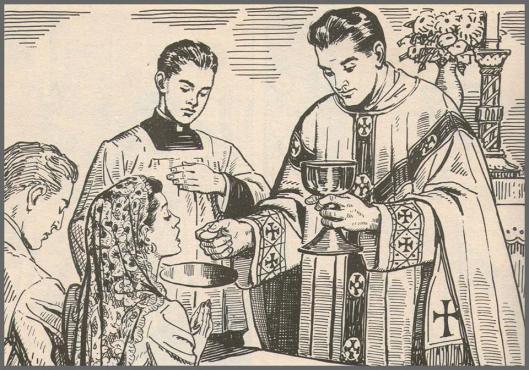 I have prepared this Lenten journal to help you to keep on track. It is to assist you in keeping focused on making Lent a special time for your family. We do not have to do great things to influence those little people. No, we must do the small things in a great way…with love and consistency. Catholic culture is built on celebrating, in the home, the feasts, the seasons, the saints, the holydays….making them come alive in a beautiful and charming way…. Available here. 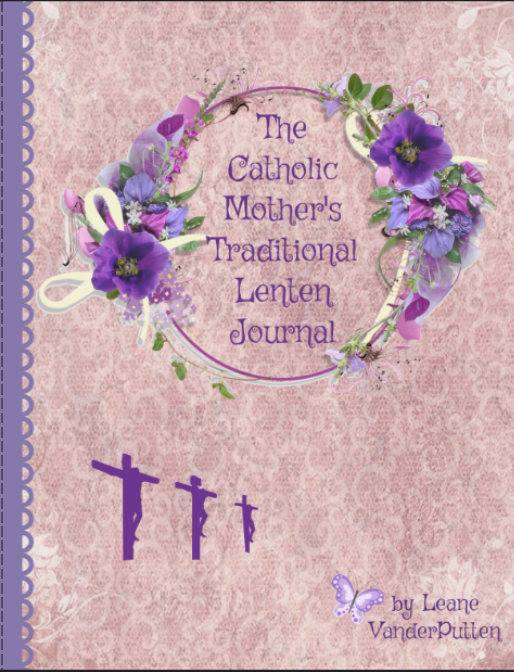 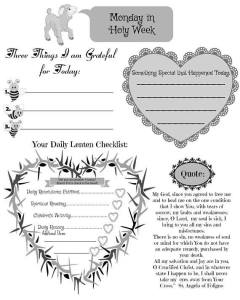 5 thoughts on “As the Evenings Grow Longer (Part One) – Dancing, Reading Aloud by Maria Von Trapp”